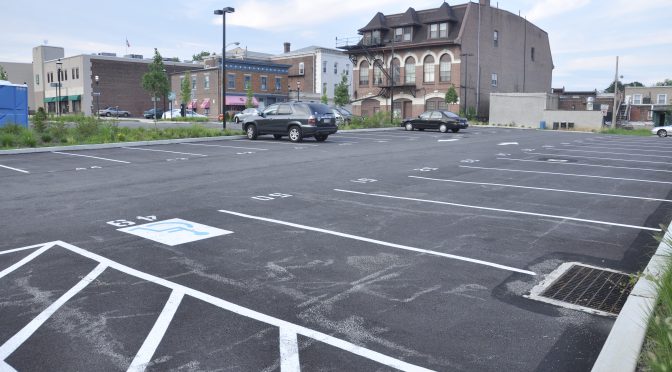 The trouble with parking is that the more you build, the less you need

An recent exchange with Jenkintown Borough Councilor Rick Bunker brings me back around to the subject of parking. Unlike probably everyone in Borough Hall, We’ve studied this issue for at least two decades, especially during our unfortunate experience of living in a Massachusetts city that had, by far, the largest downtown parking garage per capita in the whole region, and one that was almost never, ever filled — especially in its last 20 years of existence. You won’t find it there today. The city finally tore it down.

Councilor Bunker largely dodged questions about the cost to build and maintain Jenkintown’s newest lot bordered by Leedom and Greenwood. For those visiting our site for the first time, the Borough built the lot after seizing the land from the Pioneer Fire Company, ultimately borrowing $2.4 million, although it later received a one-time grant from the state for $1 million to offset the cost. We have shown that Jenkintown’s entire parking fund runs a deficit, largely because of the debt service to pay off this loan.

Mr. Bunker points to “a wonderful flowering of restaurants and businesses in the borough” as a result of this venture, but we think that a recovering economy, Jenkintown’s good location and demographics, and the investment of Lindy Properties as the real reasons for this positive development. The additional parking played a role, but we would argue that even without it, the businesses would have come nonetheless. Some of those flowers, by the way, have withered. Blame the lack of parking all you want, but most businesses die because no one wants what they’re selling.

Mr. Bunker proudly points out his effort to hold the line on taxes, but we would point out that Jenkintown Borough must raise taxes now to buy a new engine thanks to the poor decisions it made in the past few years.

What this $2.4 million plus debt service represents to residents is a subsidy for these restaurants and other retail businesses. What might make more sense is for the Borough to suspend the retail services tax providing that they promise to pool their resources and build their own garage. Perhaps some might still see that as a subsidy, but it would probably work much more efficiently.

As evidence, we present the following: Arial views of Jenkintown, Chestnut Hill, and Manayunk indicating the locations of their public parking lots.

Granted, we are not allowed to have on-street parking on Old York Road, where we would most like to have it. We’ve addressed that issue in a previous post.

How many of us love to drive out to Chestnut Hill and walk around? For those who have, did you ever look around and wonder why you don’t get the same experience in Jenkintown? Perhaps because just about every available lot in the commercial district has a building on it, and not a parking lot. Most of us put up with the inconvenience of parking there because we know we’ll find something somewhere, and besides, the walk alone is worth it.

Manayunk has two privately-owned lots, presumably built with private money. On weekends, if you don’t take transit, you will likely walk quite a distance to your destination, except that for most people, Manayunk is the destination.

It is important to remember that both Chestnut Hill and Manayunk’s business districts are considerably longer than Jenkintown’s. If you overlaid Manayunk’s district upon Jenkintown’s, it would stretch from Cloverly to Wyncote!

Again, keep in mind that Jenkintown  has recently announced a tax hike to pay for a new fire engine. According to Mr. Bunker, we have two that are more than 20 years old. I know little about fire engines or their expected service lives, but the Pioneer Fire company at one time received rentals from the land the Borough seized. Surely some of that could have contributed to the purchase of a new engine.

One thing we do know is that $2.4 million will buy 2.4 fire engines — or the one fire engine it plans to buy and have enough left over to rebuild the sidewalks on the lower blocks of Runnymede and Rodman.

Towns have a legitimate reason to fund fire prevention and pedestrian infrastructure, but they should definitely stay out of the restaurant business.

Jenkintown has a choice to make. Does it want to be the next Chestnut Hill or the next Willow Grove? So far, from what we hear coming from Borough Hall, our dream of a true walkable and vibrant downtown looks less and less obtainable.