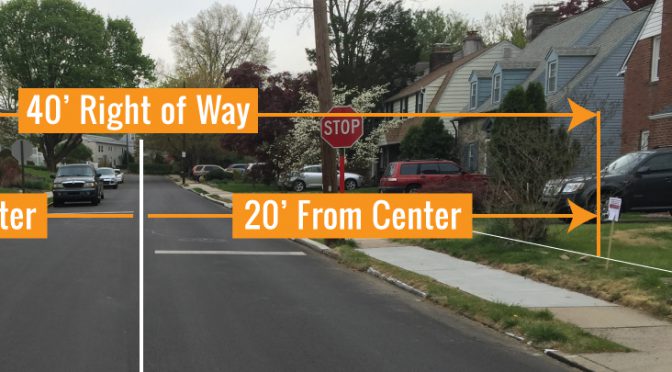 For a country founded on the sanctity of property rights, we’ve done a terrible job of keeping records on who owns what.

Do you know exactly where your property lines lie? Do you have a copy of your site plan? Like most homeowners, you probably don’t.

I spent some time corresponding with a licensed surveyor on this topic, and he expressed a rather emotional lament that in the United States, we rarely commission a survey for any land we intend to buy. “In the United States, property boundaries can move a LOT in ten years. This doesn’t occur in civilized countries with modern cadastral systems.”

Developers built our house in 1938, and in our deed, it describes the coordinates of our property lines by the surveyor at that time. We have property markers embedded in our property about an inch from the sidewalk. Unfortunately, if a site plan ever existed, the County does not have a copy. What it does have are Tax Maps, which do indicate boundaries with measurements, but little else in the way of physical details. Nothing on these maps delineate roads or sidewalks, but it does outline a 40-foot right of way.

Today, I took my 50-foot tape measure to see how much land that right-of-way encompasses. A forty-foot public right of way not only encompasses the sidewalks and curbs on both sides of the street, but another three feet beyond the sidewalk!

Let’s safely assume that a County tax map represents an official government document, and as such, tells the Borough, its solicitor Sean Kilkenny, and Councilor Rick Bunker that the Borough is forcing people to pay to maintain property that does not belong to them.

Granted, you can pass almost any law you want until someone finally decides to challenge it, and perhaps no one has yet found the motivation or resources to challenge this. Residents of Jenkintown, as well as in most other towns in this state, have accepted this policy as standard practice, and that everyone else does it this way. This is, in fact, not the case, and it’s long past time we stop it too.