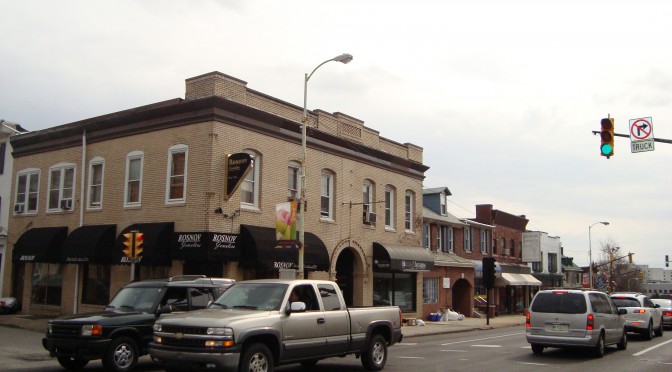 On October 29, Montgomery County will hold the Jenkintown 2035 Workshop that calls for us “to join the conversation with fellow residents, businesses, and lovers of Jenkintown to help shape the future of the Borough.” They call this “visioning”.

Officials stage these workshops because they apply a veneer of public input on the planning process. Historically they arose as a response to the bad old days of Robert Moses and the urban destruction wrought by our Interstate Highway System and other government backed follies. Sadly, these are mostly feel-good exercises that don’t accomplish much, mostly because the people who have a direct stake in the actual process don’t attend these things and do not have to abide by their results.

At these forums we find well-meaning, painfully patient government officials and planning consultants dutifully recording any and every suggestion that comes from the audience. Someone will want more elm trees. Another will suggest banners on the light posts. Someone will ask, “How about a dog park?” and another will call for someone to open a hardware store.

Eye-rolling ideas aside, real solutions to problems of walkability and sustainable development require, among other things, changes to official policy that recognize the real assets of our traditionally planned community. When developers build anti-pedestrian, cookie-cutter sprawl, they do so because of their own formulaic business planning, and because the town’s playbook tells them to. All that recent construction around Noble Station might have produced a charming transit village if Abington had enacted pedestrian-first design standards and incentives and cared less about traffic flow.

I’ve attended quite a few of these forums, so I also expect to see a very vocal contingent calling for more parking. I hope not, because more parking by itself never revived any downtown. The most vibrant, walkable  commercial districts in our area not coincidentally have a severe shortage parking spaces. Unfortunately, because Jenkintown’s parking program is in serious deficit, the Borough will want more of it.

However, for those who insist upon putting parking on the top of their agenda, I have a solution that will not involve the demolition of a single  building or the taking of another square inch of private property. This solution will also serve as the single most effective catalyst for fully reviving Jenkintown’s commercial district.

Restore Old York Road as a two lane highway with parking spaces on both sides.

Of course, I’ve heard all the excuses why this will never happen. Local lore tells it that sometime back in the Stone Age, Jenkintown made a devil’s bargain with PennDOT and sold off those spaces, probably to cover the bill for some municipal folly. PennDOT will never give them back. Never. Ever.

In the 1990s, I lived in Worcester, Massachusetts, a struggling mill town that endured the whole urban renewal debacle of the 1960s. That era left it with a dying downtown and a huge block-busting mall and office complex that bisected the primary access from all points east. Inevitably, the mall failed. Twice.

At the time, I would say to anyone fretting about the state of downtown Worcester, that it will never come back until someone tears down that mall.

“Never going to happen,” I heard more than a few times.

Then in 2004, a developer came along, crunched the numbers, and figured that he could make more money by restoring the streetscape by tearing down most of the structure. Eleven years later, the mall is gone, and the streetscape is restored.

Most people I speak to object to this idea because of the impact they think it would have on the region’s traffic. I would point out that many of those cars come through Jenkintown because they can, not because they must. I suspect that some north-south traffic might flow onto Easton Road, Highland Avenue, or onto the Turnpike and down 309. Let PennDOT and those communities figure it out.

There are many places we can’t get to in a straight line around here. I do not see why our town has to suffer for the sake of some other suburbanite’s convenience. Perhaps this will also encourage more people to ride the train.

Taking back Old York Road would not only provide all the parking spaces that everyone seems to want, it would also have the benefit of improving pedestrian safety, which must happen to make Jenkintown’s actual downtown a vibrant commercial district again. Right now, the pedestrian experience along York Road feels like a walk along the breakdown lane on the Turnpike. No amount of tree planting will change that.

I look forward to attending the workshop, but I ask people to please do a little research on these topics before they go. Maybe start by visiting the Congress for New Urbanism website.

Remember this: More parking made through demolition and eminent domain never revived any traditional downtown anywhere. Let’s at least learn from that lesson.