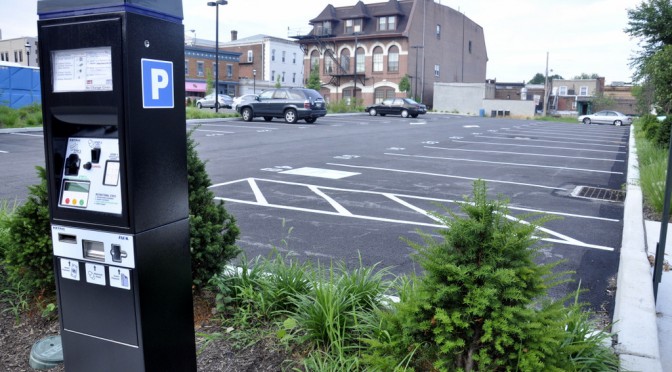 To give an idea of how Jenkintown prioritizes its pedestrian infrastructure, we should look at where it does choose to spend our money.

This blog has previously cited several times the 2009 parking lot project, and how it has impacted its budget. The budget supplied to me by Borough Manager George Locke shines some light on what can best be described as Jenkintown Parking, Inc. If run as an actual business, how would it currently fare?

For that project, the Borough borrowed and spent a net total of $1.4 million for the new parking lot bordered by Greenwood, Summit, and Leedom. Subtract the state grant to offset the cost of the project, and we have a $2.4 million investment.

As the chart shows, Jenkintown will pay $241,515 (projected 2014) in interest per year on that loan (which Deborra Sines-Pincoe has confirmed goes mainly to pay off the parking lot debt), but despite that major investment in downtown, the Borough will lose a projected $154,767 on parking.

You won’t see that in the budget, because the Borough does not associate the debt service with the parking revenues. Also, the budget does not break out the figures for what the Leedom Street parking lot alone actually collects in fees.

The lot reportedly exists to service downtown businesses, which have long cried out for more available parking in the commercial district. In 2008, when the Borough embarked on this project, the real estate market had already begun to plummet, and downtown already had a ghost town quality to it. Was parking really the issue? Or was it the lack of a business-friendly climate in the Borough?  (You might want to talk to a business owner who toughed out the bad time to get an answer.)

Remove the debt service, and the Borough’s parking business might move into the black even without the new parking lot — except for the potential disincentive that parking meters present to prospective customers, and its associated disincentive for new businesses to come to town.

Leaving that aside, if Jenkintown once applied the parking revenue to the infrastructure the meters stand, it no longer can do so. The money pay off the debt.

I subscribe to the school of thought that the more parking you have, the less you will ultimately need. I have lived and visited cities in town decimated by many things, but I can safely assert that no town has ever revived itself with more parking.

We have plenty of local examples. You will find a parking in tight supply in such places as Chestnut Hill, Manayunk, Hatboro, New Hope, and an up-and-coming Phoenixville, but plenty of sidewalk activity . The common thread running through most of these revivals is simply this: Downtowns are also neighborhoods. Clusters of people bring the businesses, not the availability of parking, not for the types of shops and restaurants we hope to attract to our borough.

Sadly, this is all traffic under the bridge. And if the Borough should decide to sell off its investment, what return do we think it might get? Anywhere close to the $2.4 million plus the accumulated debt service?