HomeTown CenterJenkintown falls to the summit 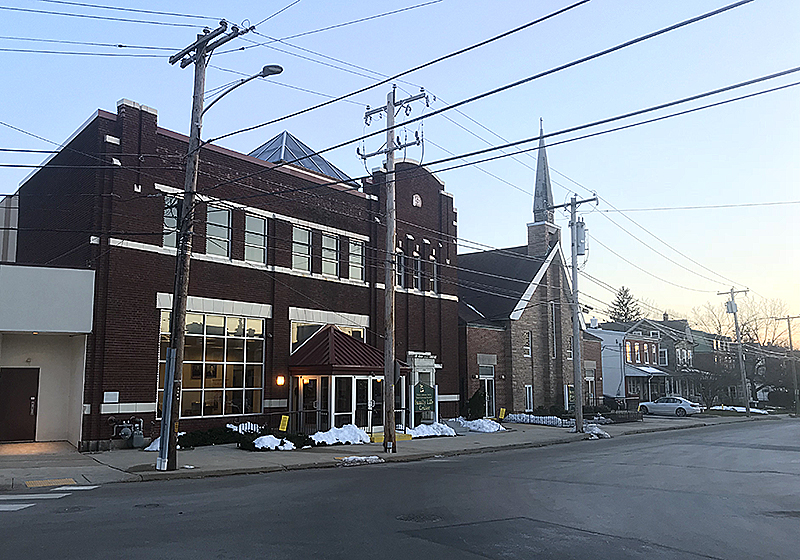 Last night’s committee meetings featured presentations and public comment that went on for at least 90 minutes before they started to address items on the BZR agenda. All in all, it was a policy wonk’s dream, especially if you like to listen to legal discussions, ponder the minutiae of tax assessment calculation, gaze upon at topographic flood-plain maps, and debate the merits of what constitutes the character of a small town. And you’d rather stay home to watch “American Idol” instead?

The agenda included presentations by SEPTA regarding its flood management proposal as well as the next installment of Scott Hummel’s Chihuahua and burro show. He brought in an independent appraiser to assuage the borough’s concerns about the impact to tax revenue. Suffice to say, he wasn’t coming to bring us bad news. However, the big topic was Roizman and the Summit House.

Public comment began and remained obsessed with the Summit House proposal almost entirely. And as this blog predicted, the parking issue reared its ugly head yet again, but this time with better graphics.

A resident whose name we failed to capture came with a Powerpoint and handouts (apparently at the request or consent of BZR Chairperson Keiran Farrell). She and resident Aly Lester led the “sky will fall” contingent with some amazingly specious claims about how more foot traffic will “devastate” our community.

Ms. Lester provided a concise argument for their position which anyone can read via this link. Let’s take in a few of their points:

The premise that 62 year-olds–even those in affordable housing–don’t drive is unfounded, and a car is required to access most services in this area.

Says someone who owns a car to access those services. In truth, the transit system here is impressively comprehensive but largely ignored by car-owning, successful professionals. A 62-year-old who owns a car and who still works and needs that car to commute won’t rent here. Problem averted.

Also, the premise is hardly unfounded. What Ms. Lester overlooks is the ongoing national trend of Babyboomers either retired or on its cusp who are moving back into urban environments. Philadelphia has benefitted from this trend as have many other urban-oriented communities with easy walking access to amenities.

The proposed parking is insufficient for the future residents of this building, and it will have a detrimental impact on our community.

I’ve been around a bit. I’ve yet to visit a community that was “devastated” by too much foot traffic. It is universally quite the opposite.

The increased competition for parking will negatively impact our local businesses.

Few places in this area have greater competition for parking than Manayunk. I wouldn’t describe all the full storefronts as being “negatively impacted” by people walking around, even after scrambling to find parking in the maze of alleys or the single public lot. Same holds true for Doylestown, Haddonfield, Chestnut Hill, Media, West Chester, ad infinitum.

Most local patrons are suburban, and suburban residents universally drive cars. As the community attracts more businesses, we will see an increased demand for parking.  Other successful towns, similar to Jenkintown, offer a great deal of public parking.

This is patently false or at least misleading. What exactly is a “great deal” anyway?

And if true that most of the business comes from suburbanites, it would then behoove us to encourage development that brings more people to live and work here.

The document claims 209 available public spaces in Hatboro compared to 161 in Jenkintown. The document further details its methodology in this count which I can only describe as pretzel-like. If they applied the same rationale to counting Jenkintown’s parking, we’d likely have far more than any of the communities they cite.

Conveniently, this document does not include the spaces behind the Jenkintown Public Library, but does include the Lindy spaces. This puzzling bit of rationalization should then also include the spaces associated with the Drake, Immaculate, the largely empty Sack’s building, and the many other under-utilized, privately owned lots scattered around the town center. I’d estimate we’d then have closer to 350 spaces.

Plentiful parking is a unicorn

It would seem that no matter how successful a downtown is, parking is always an issue. Whether a downtown is struggling or vibrant, people complain about parking. You can go to similar public hearings in just about any community, and without fail, someone will stand up and say there’s not enough parking.

In the 1960s, Worcester, Massachusetts built a parking garage with its new downtown mall that was the largest in New England. Even as the downtown died a slow, miserable death, during which owners kicked one tooth after another from Main Street to build parking lots, right up until they finally tore down the mall and garage in 2004, people still complained about a lack of parking.

Parking is like the weather, except we always try to do something about it and we always fail. Jenkintown’s parking program runs a deficit, which means that Jenkintown taxpayers are subsidizing every car that parks here in a public space. More public parking = more subsidy.

At the meeting, people said more than once how this project will impact “Jenkintown’s small-town character.”

Jenkintown from the time of its incorporation until the present would not be described as a farming village. It was developed mainly as a industrially oriented inner-ring suburb of one of the largest cities in the country. If we could pick it up and move Jenkintown, it would easily fit into the patchwork of Philadelphia neighborhoods.

In other words, Jenkintown is designed for buildings full of people.

I do sympathize with the residents concerns about the scale of this project, and according to the opposition’s professionally done renderings, the structure does look enormous compared to its surroundings. However, I’d like to present them my back yard view.

But these renderings show what exists in Jenkintown in 2018 — a hodgepodge of small, often-underutilized commercial and residential structures that are in varying degrees of condition. If they are not now, they will soon become functionally obsolete and become a further drain upon Borough resources.

This project has several inherent flaws that should be addressed. We recommend that the Borough perform its due diligence on Mr. Roizman. The grapevine tells me that he has a nasty habit of building senior housing but then quietly drops the age requirements as it suits him.

If Jenkintown wants to kill this project, then it should at least do it for the right reasons — and there are several. Doing it for some specious justification such as lack of parking will only condemn the town center to a state of stasis for another generation.