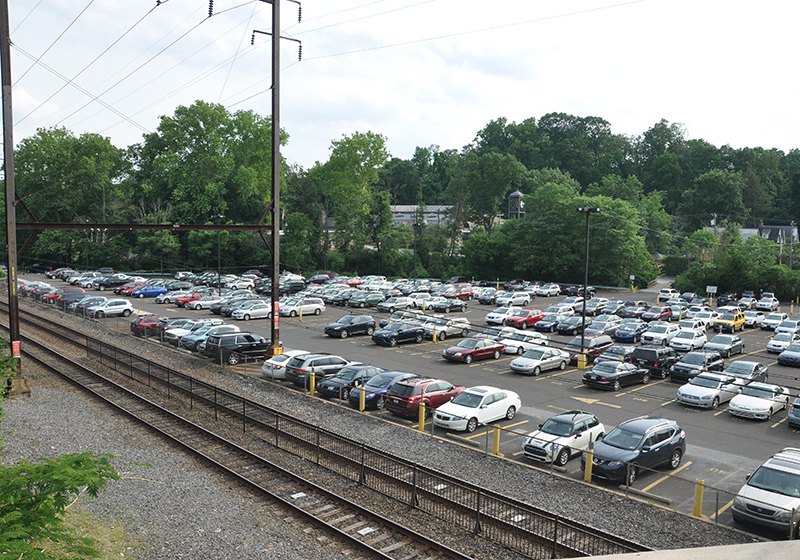 This is the area where SEPTA plans to build ADA-compliant platforms.

The last time that SEPTA announced a major development at the Jenkintown-Wyncote station back in 2009, it raised quite the outcry in the neighborhood. At the time, SEPTA proposed building a new garage for the area, and mostly Cheltenham residents mobilized to stop the project in its tracks. I attended one hearing agnostic on the matter, and that night I came away unconvinced by the arguments of either side.

One the one hand, I mostly favor any effort to put more people on more trains. On the other, I don’t particularly care for single use-parking structures. Cheltenham residents seemed to take on the NIMBY position, but it would be built in my “back yard” as well. As I saw it, we live in a densely developed area. We chose to live very close to SEPTA’s busiest station outside of Center City, and for many reasons, we want it to stay that way.

Eventually, I spoke with a resident who put the issue into what I believed then — and believe now — is the proper perspective: When the real cost of an all-day-parking space near a train station stands at probably more than six dollars, a two-dollar-a-day parking garage only adds to SEPTA’s perennial financial woes.

That and the fact that SEPTA presented no plans to make the station even more of a transportation hub supporting more bus routes, or that it would better service the outlying suburbs where most of those cars originate. I then fell in line with the opposition.

At last week’s Business Zoning, and Redevelopment meeting, SEPTA’s latest development effort came to light. In order to fully comply with the Americans with Disabilities Act, SEPTA must (literally) upgrade the platforms for wheelchair access. In order to do that, it proposes to build new platforms south of Curry Bridge, and in the process, remove at least 30 parking spaces from that lot.

Further, it will construct two elevator towers and a bridge over the tracks and catenaries that will, according to the Cheltenham Chamber of Citizens, rise 18 feet above the bridge.

Worst of all, SEPTA will move all ticketing operations into a new structure on the new platforms, effectively abandoning the original train station. This project has a budget of more than $23 million.

I almost hate to say it, but in the latest committee and council meetings, Rick Bunker takes the correct stance on this issue. SEPTA’s proposal will likely lead to further disuse and the historic station’s slow but inevitable decline. SEPTA has also sent mixed signals about what it wants in that station. To one group, they claim to want a new restaurant. To another, they will say they have no plans.

The Trumbauer-designed station is listed on the National Register of Historic Places, and just last year, SEPTA repaired the roof with funds awarded in part because of that status. Its spacious interior would easily allow for more than just a restaurant. Certainly someone wanting to serve coffee and pastries could make a go there — at the very least.

Our community and government needs to respond to forcefully. We recognize the importance of ADA compliance, but SEPTA must find a better way to accommodate the disabled without abandoning one of its crown jewels. The station serves as its symbol and the catalyst for our very existence as a town. The fact that we have such a landmark here helps to sell Jenkintown and Cheltenham as great places to live (as long as you can afford the taxes).

To learn more about this issue, visit the OneCheltenham.com. They have images showing the project and other details.