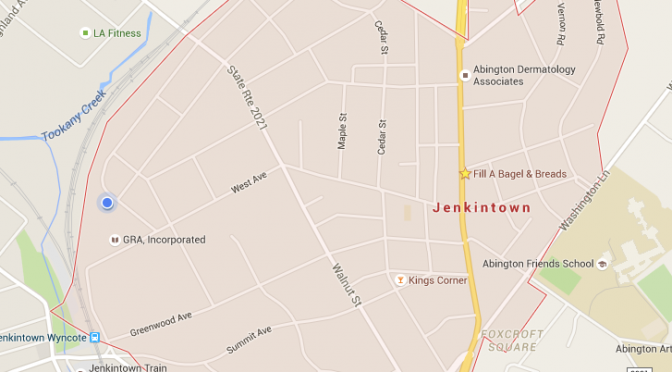 Update: Since posting this article, I discovered that I miscalculated the total sidewalk square footage. While current ADA regulations require a minimum width of three feet, the walkway in front of our house is actually 46 inches wide, which I’ve rounded up to four feet. The new numbers reflect that correction, including the headline, which tags on an extra five dollars. I apologize for the errors, but this is still a pretty good deal.

So far, I have stood before Jenkintown Borough Council twice to plead the case for better sidewalks and for a better way to pay for them. Both times, councilors asked a question I assumed was not rhetorical: “How would we pay for them without raising taxes?” Councilor Laurie Durkin reemphasized this point in her emails to me, with a not-so-veiled threat to raise taxes if we had to change current policy.

Over the past three weeks, I’ve studied the Borough’s budget, and I’m not yet convinced that the money for the work doesn’t already exist. However, let’s take the Borough at its word for a moment and estimate the cost of this project and assume that we’d need new money via property taxes to pay for it. How much would we have to pay?

Using Google Maps, I measured all the residential streets and calculated that we have a total sidewalk area of 194,744 square feet. According to an article on Angie’s List, one New York contractor said he’d charge a bulk rate of $7.50 per square foot for sidewalk reconstruction. I don’t think he’s estimating for quite this amount of sidewalk remediation, but still that equals $1,460,580 for the entire borough.

A properly constructed walkway should last at least 30 years. Due to wear and tear from vehicles, especially plows, curbs would have a shorter lifespan, but damaged incurred by third parties would make them liable. The above estimate does not include curbs, but there isn’t a civil engineer in the entire country that will tell you that it’s a good idea to pave whole streets without reconstructing curbs at the same time. Why we make this the homeowner’s responsibility is beyond the reasoning of anyone with at least a sixth grade education.

So, to cover a thirty-year sidewalk reconstruction program, our taxes would have to go up $24 per year. If you insist on including curbs, I expect we’d still be far under $100 per year.

I don’t know about you, but I’d happily pay twenty-five extra dollars per year into a dedicated streetscape fund in place of the current system. That aside, I hope to eventually prove that these funds — about $49,000 yearly — already exist within the current budget. The “contingency fund” alone has five times that amount.