HomeLegal IssuesBring Walnut Street parking into compliance before a lawsuit does 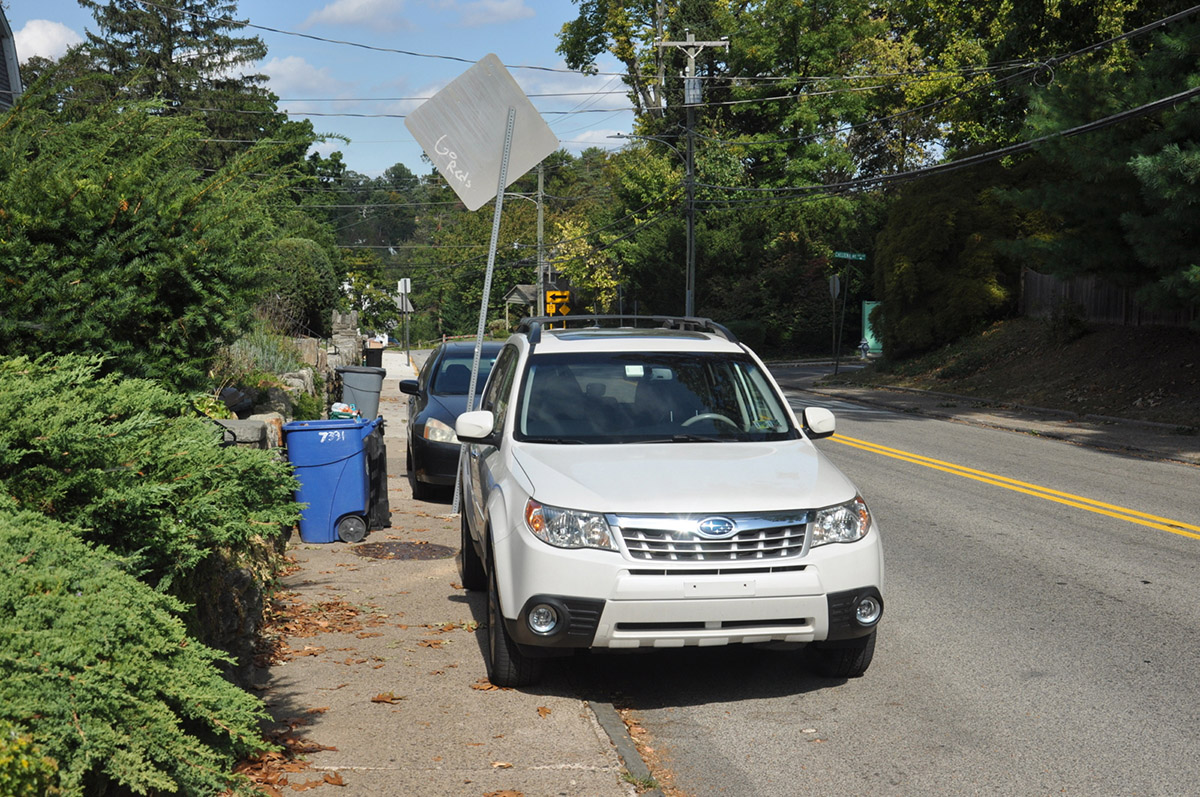 ADA requires four feet of space to allow for wheelchair access. This ongoing problem violates that requirement and the Borough is doing nothing to stop it.

Jenkintown’s selective enforcement of its own laws risks expensive litigation.

As most people who live in Jenkintown know, the sidewalk along the 300 and 400 block on the south side of Walnut Street exists primarily as a parking spot for the residents who live along that road. Of course, this is not actually the case. Jenkintown regulations, as they do in most cities and towns, prohibit cars from parking on a sidewalk. Jenkintown, however, chooses to selectively enforce this ordinance — as they have with others — because they simply don’t know what do do without causing a firestorm of protest from those offenders.

What those residents don’t seem to understand and what Jenkintown has chosen to ignore is that the Americans with Disabilities Act requires 100% compliance in all public buildings and spaces. Public sidewalks must be four feet wide, and those along Walnut do meet that requirement. Exceptions might include areas with existing and long-standing obstructions such as telephone poles, but they do not include illegally parked vehicles. The ADA does not consider the inconvenience of the able-bodied.

As someone who has counseled private businesses about the necessity for compliance, I know not only something about the law, but also the risks of ignoring it. In 1999, the City of Worcester, Massachusetts faced a lawsuit for its failure to provide 100% compliance during renovations of its historic train station. The ADA accessible platforms did not extend the full length of the train. The suit halted construction on the $60 million project and delayed its opening by several months.

As a consultant for the restaurant industry, I’ve met with people seeking to restore historic structures and put them back into service. They would often bristle at the notion of expanding doorways to accommodate wheelchairs or to build obtrusive ramps which would harm the historic nature of the structure. My advice was always the same: Do not even think about trying to get a waiver. It only takes one guy in a wheelchair to show up at your permit hearing to stop your project cold and invite litigation.

The power of the ADA is not something to be trifled with, and indeed, the Borough spends significant money on building accessible sidewalk ramps. That’s the law. They have no choice.

The ADA doesn’t care about your sideview mirror

However, the situation on Walnut Street is not only a safety hazard for able-bodied pedestrians, it is impassible for the disabled. Eventually, the Borough could find itself embroiled in litigation that will demand enforcement of the law with significant fines by the state for its ongoing failure to comply with the ADA. That is simple reality.

Residents have complained online that they don’t want to pay for $400 mirrors; that this is a town from the “horse and buggy days,” and worse, that anyone who dares suggest the Borough actually enforce its own ordinances must be “an idiot.”

Don’t shoot the messenger, Jenkintonians. I sympathize with residents and understand their frustrations. I too have lived in areas with horrible parking, but I never dared to flout the law or claim a right to do so.

If you want to safely park your car somewhere, may I respectfully suggest purchasing a house with a driveway or access to a parking lot. The sidewalk does not belong to you. It is, as we have always maintained, a public resource reserved for the pedestrian.