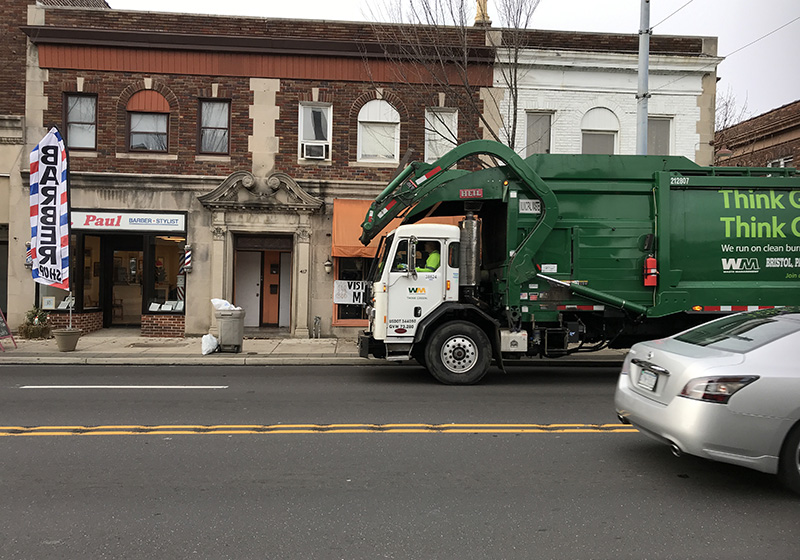 Walkable Jenkintown calls for PennDOT to put York Road in Jenkintown on what planners call a “road diet”. In order to reduce traffic, its speed, and to catalyze the revival of commerce on the York Road and the surrounding commercial district, PennDOT must reduce road capacity by removing a lane of traffic in each direction through Jenkintown between Washington Lane and Cloverly Avenue.

Q: This idea is nuts. Where’s all that traffic going to go?

A: The short answer is, “somewhere else” but that’s just me caring more about pedestrians than cars. Let’s start with some historical background first.

York Road experiences such heavy traffic volumes simply because it has the capacity for it. PennDOT expanded capacity in the 1970s to deal with a classic 1970s problem: Getting cars from the city to the outlying suburbs and to expand an existing arterial into Philadelphia to accommodate commuter traffic — despite the fact that train service existed to do exactly that. People had begun to lose interest in public transit back then and the Reading Railroad was going out of business, so PennDOT stepped up and gave us lots more roads to drive our cars.

Attitudes have changed since then. SEPTA provides pretty good service between the city and the burbs (despite the constant complaints about it), but more people work outside of the city than within it now, yet York Road remains heavily used because it’s there, not because it’s needed.

So, where will the traffic go? Some will continue to pass through Jenkintown, but almost as much traffic passes through Rockledge as it does through Jenkintown, and Rockledge doesn’t experience the car-mageddon that some Jenkintonians have predicted for here. Speaking for myself, I stay away from Rockledge at rush hour because I know how congested it can get. I suspect thousands of potential trips are canceled in this manner every day. The same will happen in Jenkintown.

Second, alternative routes do exist. Washington Lane and Easton Road are just two. Route 309 exists for exactly this. If you go to Google maps and plot routes (for sample’s sake) between the H-Mart in Cheltenham and the Home Depot in Willow Grove, you save only 1 minute traveling through Jenkintown over taking the Turnpike to 309 south.

Several other technological solutions exist to alleviate traffic flow in this corridor, including the Waze app and other live GPS tools.

In other words, yes, this will largely take care of itself.

Won’t cars just use our side streets?

Have you ever tried to do that? I have. Trying to save time between the Abington Wawa and the Fern Rock terminal, I took the Runnymede/Cheltena/Cedar/Washington Lane detour. Big mistake. I’ll never do that again.

Jenkintown streets are too choked by one-ways, stop signs, oncoming cars on narrow streets, and speed humps. Only a true masochist would attempt that twice.

Isn’t it a state road?

Which is why we have to ask the Governor. For whatever reason, our own borough council has gotten nowhere with this. They keep appealing to PennDOT. PennDOT keeps shooing us away. We think they should go over PennDOT’s head.

Do you really think this is possible?

Yes, but it’d be a long slog made longer by the fact that our borough government can’t get anywhere with PennDOT. Why, isn’t clear, but this for at least the sake of raising the profile of this issue we are petitioning the governor. Nothing good will come from doing nothing.

Didn’t Jenkintown sell off the parking spaces in the 70s?

This is a common myth. The state has always owned that road, and in fact owns it right up to the storefronts. When Jenkintown issued it’s long-range plan in 1962, it planned to expand York Road to four lanes. Since PennDOT always owned that road, stories in the Chronicle suggest it could have removed the parking spaces any time they wanted.

Why do you say Jenkintown isn’t walkable? I walk everywhere in town.

In this context, walkability doesn’t mean ability to walk around, it means desirability. You can, if you want, walk from the Willow Grove Mall to the Olive Garden, but you won’t.

Is Jenkintown the kind of place where you’d park your car and spend the day? Maybe you have an appointment at Hot Yoga or maybe your kid wants a cupcake, but is Jenkintown a destination to spend an afternoon? No. It’s not.

By contrast, in Ambler, you can shop, eat, catch a movie, grab a beer, see a play, or get a haircut. Its atmosphere is more conducive to social interaction than Jenkintown. Ambler has Deck’s Hardware, one of the most amazing independent hardware stores within 50 miles. You don’t just have one brewery, you have two — and a wine bar. You have a barbecue place, a Mexican place, an old-guy bar, ice cream shop, a Rita’s, several gift shops, upscale and downscale dining options, and sidewalks used by people who live, work, and visit there in volumes that Jenkintown can only wish for right now. It has things I don’t yet know about, because it’s changing constantly. This was not the case only ten years ago. Jenkintown has made far less progress.

You don’t want to go to Ambler? That’s your choice. Maybe you don’t appreciate downtown experiences like I do. I love them. Nothing better. In every aspect of that, Jenkintown comes up short, and as a community, we are paying dearly for that.

That’s what men say, and men will do all kinds of nutty things with no regard for their safety. Women, and especially mothers of small children, don’t feel the same way. As far as I’m concerned, that’s the true litmus test.

What does making York Road slower do for Jenkintown?

If we can create a more pedestrian-conducive environment on York Road, we have the opportunity to make the properties there more valuable and in the process raise their tax assessments. Jenkintonians are straining under the weight of our tax burdens, made much worse by commercial district assessments declining since 2009 (the year they opened that new parking lot, by the way).

If I told you that a two-lane York Road could lower your taxes, would you support it then?

Doesn’t our Jenkintown2035 plan have the answers?

The Jenkintown2035 plan does express a very high priority on proper development of the commercial district and along York Road, but the plan is essentially useless unless the Borough actually commits to it. The Taco Bell development is a very bad sign. The Borough does not have a Main Street manager. It has George Locke, who has contributed nothing that anyone knows about to this process, and under his watch, code enforcement along York Road has gone lacking.