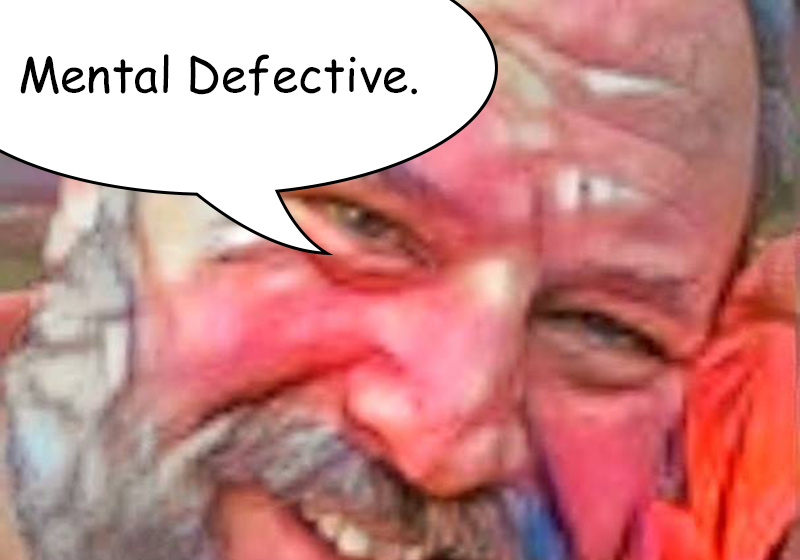 “Think about it. We have a president who is so easily played by a cable news host. What does that say to our allies?” — Mika Brzezinski

I heard that this morning as I sat down to write this. Replace “a president” with “Rick Bunker”, and “cable news host” with “blogger” you have some idea of Mr. Bunker’s thin skin,$general demeanor, and disregard for his position and his community.

Our beef with Rick Bunker began when he made the following remark about our suggestion to find a better way to maintain our sidewalks:

“This is the we’ve always done it, and it’s the way the rest of the state does it. I see no reason to support this change. No one is complaining about the way we’re doing this.”

Even when presented with overwhelming evidence of this ordinance’s waste and the hardship it imposes, all Mr. Bunker wanted to do was shut down the conversation. I knew nothing of Rick Bunker at that point (except that he owned a gun), but I knew then that I had found Jenkintown’s bette noir.

Forgive me, but when I hear a politician so emphatic in his opposition to a simple request to discuss a matter of importance, I wonder about possible corruption. For what reason would someone in a position to help be so blatantly obstructionist and hard hearted?

We began this effort not only because we thought a wholesale method of sidewalk remediation made better sense from a financial and engineering standpoint, but admittedly because it was going to profoundly hurt our own financial situation. We went to the Borough and asked them to help us, and Rick Bunker said to suck it up.

So, we dug in and went to work. Employing the Right to Know law, we researched what the community paid for all the recent sidewalk work. Mr. Bunker called our efforts a waste of taxpayer money, except that several taxpayers wanted to know who paid what? Unlike the Borough, we could tell them. This was information that should have been readily available since the Borough asked for it on two of the four permits it used. After all, you did pay a filing fee.

Then the Borough entirely eliminated the contractor’s estimate line item right about the time we raised this issue. Why?

Final finding? You got fleeced, our sidewalks are a mess, and Rick Bunker doesn’t care. For my efforts, he branded me a “mentally unhinged loser”.

Mr. Bunker began his attacks in earnest last summer after we began to research and report not just sidewalks, but the Borough’s governance as well.

To be fair, Mr. Bunker originally posted an unsolicited, voluminous, and rather thoughtful response on my personal Facebook page where he explains why the current ordinance makes perfect sense to him. However, no part of it addressed the unnecessary expense of the policy to homeowners or the poor results for the community. Instead he speciously justified it claiming, among other reasons, that people might want their sidewalks to look distinctive.

He also made unsupportable claims that homeowners owned the sidewalk. He might also say that homeowners own to the middle of the street (and maybe we do), but yet the Borough paves that. Trouble is, no one seems to know for sure, and least of all Rick Bunker.

Last December, I wrote about my experience interviewing for a council seat, and on January 2 of this year at 1:43 in the morning, Rick Bunker left this message on my website:

After that inexplicable, and possibly drunken post, I decided to just move on. I was done with Rick Bunker and would not engage with him. Hopefully, he would get the message and do the same. Not a chance.

We posted our article about “found money”, and Mr. Bunker left a lengthy response in the comments on the web page. I decided to withhold response. Honestly, I didn’t care what he thought. Mr. Bunker’s hypocrisy seems to know no bounds. My personal experience with the Council VP forcefully illustrates that pretense. One would think this self-proclaimed “lefty liberal” would concern himself with the plight of the little guy and with government transparency. Mr. Bunker doesn’t appear to care about either.

Finally, Mr. Bunker wrote within the Facebook page comments for that story:

Against my better judgement, I had respectfully challenged Mr. Bunker on his assertion that spending the $11,000 recycling grant “correlates” to more recycling. Mind you, we gladly recycle, but as taxpayers, we merely presented a reasonable question to a public official. Rick Bunker’s response was to call me a “mental defective”.

I have since politely asked Mr. Bunker to refrain from posting anything on our page. I don’t wish to stoop as low as our Mayor Ed Foley has with me and actually ban him. Instead, I leave it up to Mr. Bunker to see if he can maintain a modicum of civility and restraint and just leave us alone. Instead he has threatened to continue with his attacks.

Rick Bunker is unfit for public service, and I’ve spoken privately with others on the Council feel the same way. I do think that he’s an extremely intelligent person. Unlike our current president, he speaks and writes with great eloquence, but like Donald Trump, he does not suffer dissent with any civility. He displays a thin skin and a penchant for viciously attacking his opponents on social media — even at early morning hours. Yes, I’ve referred to him as a pompous bloviator, but Mr. Bunker himself agreed that the appellation suited him.

I do ask that at the very least, Council remove Mr. Bunker from his position of Vice President. He’s simply making Jenkintown look awful, and I would hope that the good people in Ward 3 would vote for his replacement.

Otherwise, Rick, Walkable Jenkintown is done with you. Hopefully, the rest of Jenkintown to follow.