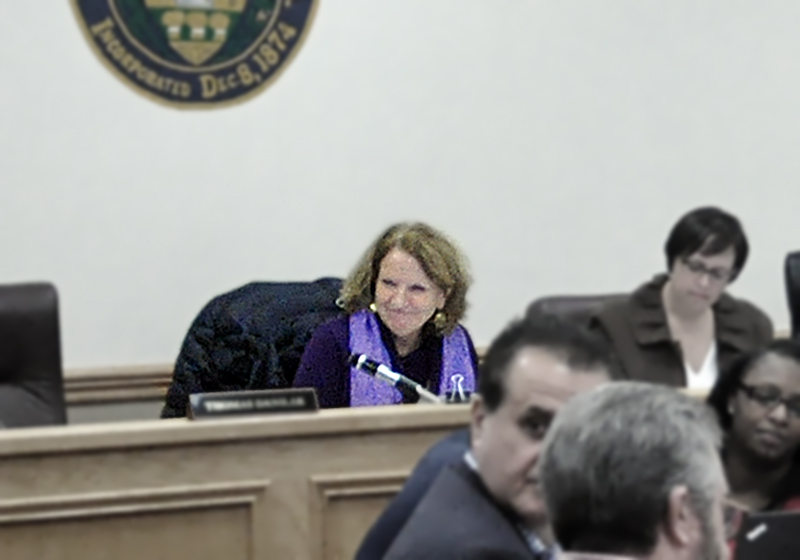 Deborra Sines-Pancoe extolls the virtues of transparency, but her actions drown out her four minute statement.

Council President Deborra Sines-Pancoe delivered a rambling four-and-a-half-minute statement last Monday that considered some of the controversies currently swirling around 700 Summit Avenue. Much of this statement sounded like a defense of her and her colleagues on the board, but she also took some swipes at the “inordinate” number of Right to Know requests, and the verbal attacks that she and others in Borough Hall have had to endure in the past several months.

We’ve taken Ms. Sines-Pancoe to task in the past for her curious cluelessness, which she exemplified last Monday when she observed a “full house” at the meeting, when in fact only eight people turned up. In the past, she told Borough Manager George Locke that she thought the sidewalks “looked great,” when in fact they look like a sloppy hodgepodge.

Like George W. Bush telling former FEMA head “Brownie” he was doing a “great job,” we start to wonder about Ms. Sines-Pancoe’s comprehension of the realities that confront this borough.

Most of her statement addressed her commitment to transparency and openness, especially in light of recent developments and the announcement that the Borough may sell its properties for redevelopment. This assertion flies in the face of her actions in the recent past where she:

Ms. Sines-Pancoe also took great pains to remind us all that she, her fellow council members, and the mayor serve as volunteers. “We are performing community service,” she stressed. The implication being, of course, was “You should all stop being so critical.”

As previously stated, I applaud anyone’s sense of volunteerism, but just because you do not accept compensation for your efforts does not put you beyond reproach — especially when you assume the reigns of power. For many people, power is its own reward. Our volunteer council has the power to take our homes, to put it bluntly. Volunteers that don’t know how to do their jobs or who abuse their positions do us no favors.

Finally, with regard to the Right-To-Know requests, I myself have filed maybe a dozen in the past six months. I know for a fact that two other residents have also busied themselves filing requests as well, mostly to learn more about Borough activities.

Speaking for myself, I file them because there is simply no other way to get the information I need to draft proposals for improving my community or to build a case illustrating Borough ineptitudes. Ms. Sines-Pancoe complained about the cost to the Borough of these requests, but I can assure her that if the Borough was indeed transparent, we would’t need to file the requests for the information.

I am currently engaged in an effort to receive official information about a one particular Council member, and the Borough has retained Kilkenny’s office to cynically and illegally obstruct this request with prohibitive demands.

The grapevine tells me that Deborra Sines-Pancoe plans to run for reelection, but to paraphrase Henry II, will no one rid us of this meddlesome councilor? I rather that she would spare us any further lip service to providing the good government she falsely asserts she is providing.

As I have stated numerous times before: This is a tiny borough. There is simply no excuse for our government to serve us so poorly and to work so hard to keep us in the dark.

Listen to the full statement here: