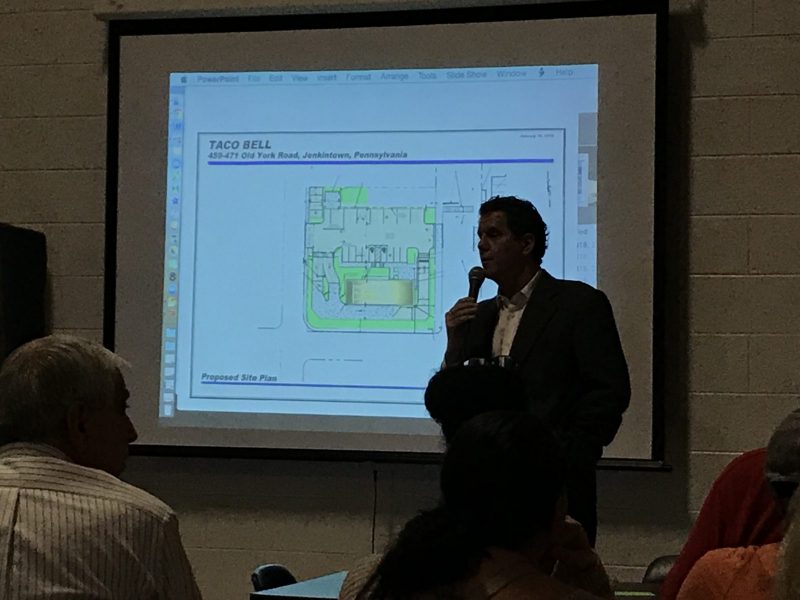 For this walkability advocate, it’s deja vu all over again.

Twenty years ago, my former home town considered a plan to demolish a five-story, historic retail store on prominent corner in its downtown and replace it with a McDonald’s, Shell gas station, convenience store combination. This poor city had long since suffered the ravages of having teeth kicked out of its main streets for thirty years before that, and those who cared about the city’s future, desperately hoped this property could be saved. I joined that cause. Somehow, miraculously, the zoning board voted it down. Today, that building is filled with life as an artist residence with retail shops, anchoring a new arts district in Worcester, Massachusetts.

Here we go again, only this time Jenkintown Borough Council thinks it would be just fine to tear down a handsome, occupied historic structure and replace it with a fast food joint — all for the money. Money, they claim that will stave off further tax hikes by both the Borough and the School District, which is reportedly $800,000 in the red. Believe me, we all heard about the dire straights of the school district tonight — like a bludgeon beating away our desire for a better Jenkintown.

The developer needs a variance because ten years ago, Borough Council passed an ordinance that specifically prohibited exactly this type of development. No drive-through windows and all new buildings must stand at least two stories tall, but apparently all is fair in love and zoning ordinances. Council President Deborra Sines-Pancoe said this was merely like allowing a fence to be an extra few inches higher than other fences. Thankfully my disgust with her rationalization was tempered by watching her flap in the wind trying to explain this disaster. This is leadership?

Council Vice-President and Social Media Bully Rick Bunker, with foot well-planted in his mouth, dismissed concerns about walkability saying that this Taco Bell was “far from Jenkintown center,” and that we have all the walkability we need around Town Square.

This didn’t sit well with residents who lived around Vernon and Homestead, some all their lives. Apparently, you only deserve walkability if you live near our “pretty parking lot”. Trouble is, that square is surrounded by more parking lots. Bunker also attempted to dismiss the issue of a drive through in that area because of the Dunkin Donuts and the Outback. In other words, the area’s already trashed, so let the cancer spread. Bunker’s house on Summit, by the way, is well-removed from this kind of architectural dreck.

One resident reminded us that once Taco Bell gets their variance, then it’s open season on that end of Old York Road. We can probably expect a KFC or a Burger King to follow soon after. Summerwood builds those too.

The residents who spoke up kept their tone in check, especially after Councilor Kimberly McGlonn wagged her finger and shamed us into it. Residents, however, were rightly angry because she and her colleagues were selling them out.

Many good points did emerge, on both sides of the issue frankly, but Council could not escape their hypocrisy and their mismanagement of Borough finances. Pancoe on the one hand expressed her desire to keep that property on the tax roles forgetting that she herself is responsible for removing the Cedar Street property from them. If the Borough needs money, they can grab a quick $350,000 by selling that property tomorrow.

And frankly, I shed few tears for the School District as well. Those of us in the working class that cling desperately to their houses are well aware of the vicious cycle this funding system imposes upon us.

the JSD is making it very hard for people to stay here. People move here for the schools, which should make raise our property values, but the level of taxation then negates that advantage. So, because of the JSD, we have a great school, but we then seek quick fixes for fast money. As it gets worse, the school goes into more debt because tax assessments go down. It’s a vicious cycle.

If ever you needed justification for the passage of HB76, look no further than the Home of the Drakes. They spend more than $26,000 per pupil and proudly cite the fact that it’s in the top 30 of districts in the state. For that kind of money, they should be in the top 5 and graduating our kids with pre-awarded Princeton diplomas.

The owner of the property did not do his due diligence. This Hellweg lot provides a high-profile opportunity for a developer with half a brain to turn it into a real point of pride. Instead, he entered into an easy deal with someone he happens to know all to make a quick buck. The franchisee, Summerwood, has a template that fits onto that lot, and that template requires a drive-through because that generates — in their own words — 65% of their business.

Well, why Jenkintown? Because Mr. Hummel, the owner, and Mr. DePasquale can smell blood, and during their dog and pony show that DePasquale all-but-phoned in, they tossed out rosy numbers that no one should take as gospel. A two million dollar development does not mean a two million dollar tax assessment. As soon as they turn on the lights, you can bet DePasquale’s lawyers will be in Norristown fighting to get that assessment dropped down closer to what Hellweg’s paid. Never, ever believe a developer’s numbers in these situations.

For an example on how to do this properly, one doesn’t have to travel far from Jenkintown. In Mt. Airy and Germantown, developer Ken Weinstein has made major strides in the name of walkability and sustainability by rehabbing old industrial buildings — and even an old Arby’s — into places that have added value and charm to those neighborhoods. He has brought both much needed tax revenue and a solid sense of livability to the host communities. It takes someone with vision and resources to get these projects done, of course, but isn’t that what our town truly deserves? Jenkintown actually has a population with great demographics and this is the best Hummel can do?

Well, maybe. After all, you elected this board, people, and all twelve of them think it’s just fine to renege on promises when they become inconvenient. This Council has made it quite clear that they will not follow the Jenkintown 2035 plan when it gets in their way or when expedience dictates. Why did we bother?

Let’s also not forget that both the Borough and the School District possess the power of eminent domain and that towns across American have condemned whole neighborhoods of occupied homes so that they could sell those properties to developers. I used to think that Jenkintown would never do this. Now, I’m not so sure.