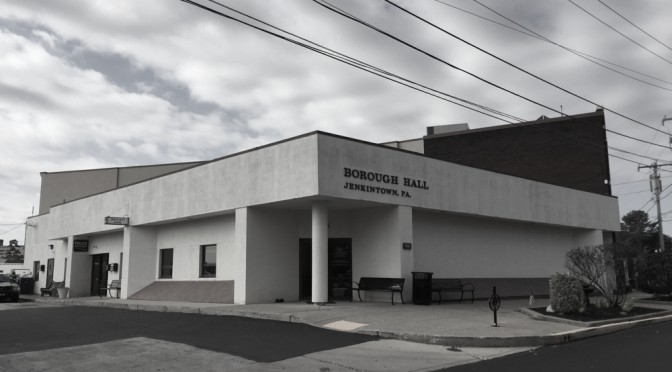 No one much likes bureaucracies, except maybe those who work in them. Bureaucrats have the tendency to do most anything to justify their existence, whether or not their role has any real value to the society for which they serve. “My job here is done,” said no government official ever.

In a local government, this manifests itself in several ways, but mainly through all the extra fees paid for services we otherwise expect to pay through our taxes. Jenkintown Borough compels us to fix their sidewalks and curbs, and then gives us a “break” on the permit fee, charging only $25 for the permit (as opposed to $40 per $1000 of the cost of the project). On what planet does that make any sense?

On Planet Jenkintown, this fee covers the “inspection costs”, meaning that the people already on the payroll somehow cost extra when we ask them to do the jobs that the Borough hired them to do in the first place. Which bureaucrat’s position does this practice justify? How can you call this anything but yet another municipal cash grab?

After last month’s Council meeting, this weighed on my mind as I considered Borough Manager George Locke’s response to this blog’s arguments for a better sidewalk policy. We believe that the current sidewalk and curb policy costs too much and despite what Council President Deborra Sines-Pancoe says, produces inferior, if not laughable, results.

Almost on cue, after I read my statement to Council, Mr. Locke presented a spreadsheet suggesting that if the Borough actually assumed responsibility for its own pedestrian infrastructure, residents would have to swallow a $350 property tax hike. This then begs the question, would you rather pay $350 per year extra for as long as you own the house or would you rather pay three, four, ten thousand dollars all at once, and whenever the Borough happens by and finds yet another crack in your walkway or curb?

Before you answer that, let’s first examine Mr. Locke’s position-justifying methodology. Mr. Locke presented his numbers as they would apply concurrently with the ongoing paving program, which resurfaces nearly half, or more, of the borough streets within three years. The Borough repaved the entire length of Runnymede Avenue (and along one stretch, twice). Just eyeballing it, residents rebuilt about thirty-to-forty percent of the sidewalks along the same street.

You could argue against the urgency of this program (and we do), but no one in their right mind would suggest that the Borough needs to rebuild 100% of that abutting curb and sidewalk within such a short time span. This blog never suggested that. Even if it could afford it, the borough doesn’t need it, and the residents wouldn’t want it. This blog has always advocated a measured program of maintenance, done on a wholesale basis, with a plan for the future.

Obviously, Mr. Locke’s “shock and awe” numbers do lend justification to his position, his program, and the outdated, arbitrary, and needlessly disruptive sidewalk policy the Borough is too lazy to change.

We’re told by many residents that George Locke is a great guy. No doubt that he’d readily buy a round of beers at Guild Hall for his buddies, but this Borough needs someone with a level of expertise, energy, and imagination clearly not in evidence for anyone who walks around this walkable community. The inspection process, something Mr. Locke is reportedly expert in, was rife with inconsistencies, confusion, and troubling stories of politicking. The management of this whole dubious paving program can best be described as bumbling.

Then again, perhaps “vision” and “imagination” isn’t in a borough manager’s job description.  The council-manager form of government often doesn’t require its managers to actually lead or advocate for its interests. So, who does?

Maybe a borough manager sees his role as someone who only needs to adhere to the ordinance playbook, take his marching orders from the Council, collect his check and go home. Either way, Jenkintown deserves better.