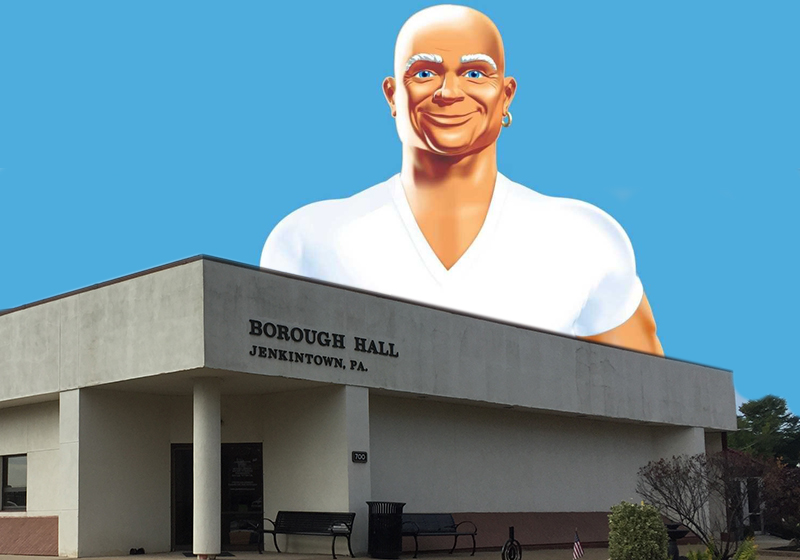 Most people who live here want to preserve Jenkintown’s small-town character, and yet our leaders seem hell-bent on letting that unravel. Council President Deborra Sines-Pancoe, social media bully and Council VP, Rick Bunker, and finally Borough Solicitor and FBI target Sean Kilkenny have led our town and its citizens into a growing thicket of municipal failures and public outrages.

It concerns me particularly, because I’ve traveled though hundreds of small towns across this region, observing that cities and towns enter decline for many reasons. They keep declining or linger in malaise for mainly one: The absence of capable, visionary, and civic-minded leadership.

My residence in Jenkintown goes back 15 years now, and I can objectively say that in comparison to the communities around us, our town shows little progress. A parking lot, a movie theater, and brew pub do not make up for the continued lack of overall economic activity and declining tax base in our town center, even in comparison to what I found when I moved here.

To any outsider who casts even a casual glance into the activities of our local government, clearly we look bad. Foolish, might apply even better. Here’s why.

One: The paving program

Announced to residents via mail without warning in April, 2015 and without any general public hearing at all, the Borough’s paving program caused a mad scramble among residents to fix sidewalks and curbs inspected by borough workers who normally go around picking up trash and filling holes. This provided a bonanza for contractors who took full advantage of their captive market charging wildly fluctuating fees for an accordingly varying quality of work. As a consequence, Jenkintown residents spent double to triple what the Borough would have paid with a wholesale program and have a substandard result to show for it.

Using transparency rules written when no one heard of the internet, Borough Council announces a purchase of two adjacent parcels on Cedar Street at below market price with money discovered from a loan renegotiation and discussed in executive session. Then Council stands back in utter amazement that anyone might object, and emphatically claims its commitment to the open process in the face of public outcry. This purchase not only ignores the goals of the still-not-implemented Jenkintown 2035 plan, but it will cost money that the Borough does not have. We hear that it has applied for grants for design and build-out, but it could instead apply for grants that might further town center development. Or perhaps it might use its limited resources to work on the laundry list of code issues that have grown during George Locke’s tenure.

The announcement of both Taco Bell and the Summit House project landing in Jenkintown all-but-begs deeper scrutiny. They both expose the Borough’s fumbling management and put Council’s commitment to Jenkintown’s future and oft-stated principles of transparency to the test.

The Summit House project just smells bad. Some residents have hysterically predicted a parking apocalypse, but this distracts us from the true threat to our town. The residents who live near the looming project do have legitimate concerns about the impact to their property values. However, the real concern has more to do with the ominous connections between Israel Roizman, the local and county Democratic Party, and Sean Kilkenny. We suspect that Roizman would rather not build here, but he endures this arduous process as a favor to Kilkenny who knows how desperately Jenkintown needs the money to complete future sewer upgrades.

The Taco Bell proposal lays dormant for now as the developers have yet to refile their variance application, but the spectacle of all twelve Borough Council members voting their support of this idea numbs the mind. While we have no issue with a Taco Bell coming to Jenkintown, we do have a problem with zoning codes that effectively mean nothing. Some on Council erroneously claim that they can’t really stop any legal business that wants to set up shop here — except that zoning exists for exactly that reason. The whole spectacle of Borough Council bending over for the sake of a few shekels has any reasonable person wondering why bother paying lip service to walkability? Why not just declare it open season on York Road buildings, summon the bulldozers, and call it a day?

In the interest of full disclosure, I helped with Peggy’s write-in campaign. I did this because of Peggy’s declared commitment to, among other things, a more open government. While Louise and I had our own problems with the Borough, the Downses predicament has exposed Jenkintown government’s bullying tactics and its willingness to use its own zoning codes as a weapon against dissent.

The story began when a new neighbor began renting the house next door and has unspooled in somewhat epic fashion. In an indisputable violation of zoning, the neighbor began to operate a concrete business on the property. The Downses filed a complaint with the Borough, which triggered harassment from the neighbor. Despite several appearances before Borough Council, the behavior continued and a citation was not issued.

Taking matters into their own hands, the Downses filed a criminal complaint in District Court and prevailed with the court finding this neighbor guilty on all charges. Thanks to our own experiences, we already had a low opinion of our borough’s governance. The fact that the Borough not only dragged its feet in helping the Downses, but that they obstructed their efforts to settle this matter sealed the deal in our minds. We began to wonder who or what exactly does this government represent?

Coincidentally, a few weeks after last November’s election where Peggy received nearly 40 percent of the mayoral vote as a write-in, she and Dave received a citation from the Borough for operating an unspecified business in violation of code. The citation arrived without a site inspection or any other supporting evidence. Imagine a restaurant receiving a failing sanitary grade from inspectors based on a Yelp review. Rather than capitulating, the Downses lawyered up and on March 26th of this year, got the citation dismissed in district court.

On the same day as the dismissal, Jenkintown Borough issued a new citation, redrafted to claim the Downses operated a code-violating landscaping business — this despite the failure of the Borough to inspect the premises, even after an invite from the Downses. The citation’s sole basis of legitimacy rested upon the complaint of a next door neighbor currently serving jail time for his harassment of the Downses. This also despite the fact that the Downses operate NO such business at this location. Conveniently, the new citation arrived on the day of the next Council meeting which prohibited Council from discussing the matter.

This leads to one very important question: How much is this costing taxpayers? The only two people benefitting from this circus are Jenkintown Solicitor Sean Kilkenny and the Downs’s attorney — proving yet again that the lawyers always win. The Downses fight this because they have stated repeatedly that they do not operate a business, impactful or otherwise, and the Borough has failed to show evidence to the contrary.

According to the heavily-redacted documents received by Walkable Jenkintown from a Right-to-Know request, the Borough has so far spent $5,550 in taxpayer funds pursuing these citations — nearly as much as the Downses have spent in fighting them. Given Sean Kilkenny’s association with other scandals, we have little faith in the veracity of this figure.

Remember that this Democratically controlled Borough has launched a thinly veiled vendetta against a fellow Democrat. Heaven help the lonely Republican or Independent in Jenkintown who rubs Sean Kilkenny and his Gang of 12 the wrong way.

Keep all this in mind the next time you hear Council President Deborra Sines-Pancoe call for civility in public discussion while proudly affirming the Borough’s commitment to transparency. You will not be blamed for laughing out loud.